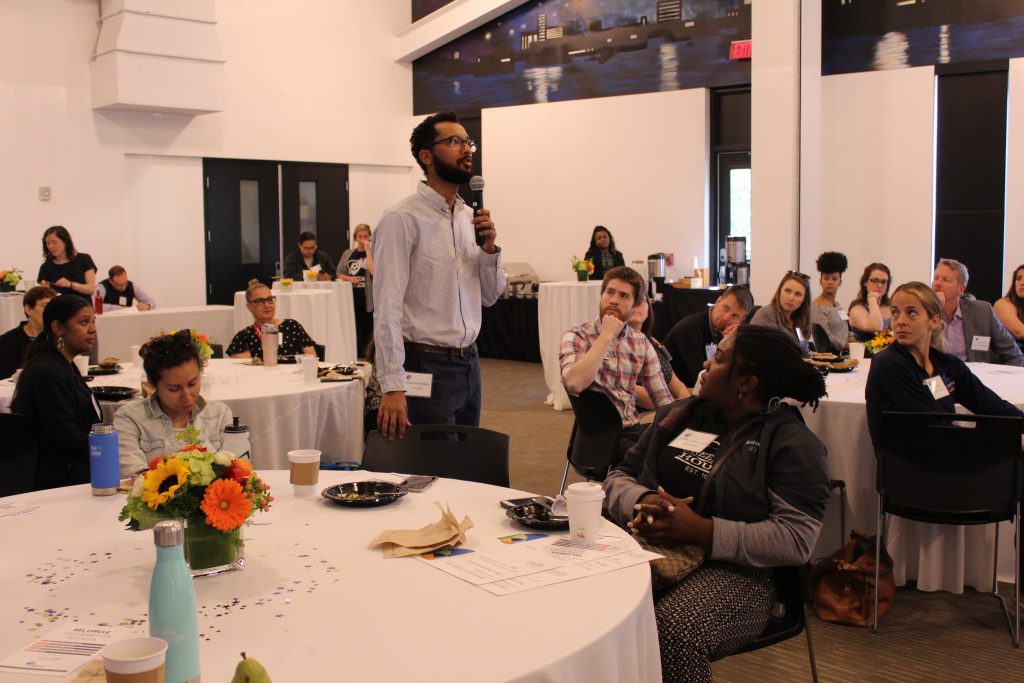 “It seemed like a wild idea,” says Shaunda Lewis, Program Director of Social and Emotional Learning, of beginning the SEL Circle– a series of workshops on social and emotional learning topics for all programs in the Boston Beyond network. “As adults we often jump to how we help kids develop skills. It is really important for us, as human beings, to get it before we facilitate it and model it for young people.” Over breakfast at District Hall on the clear Monday morning of June 10th, we heard from SEL Circle participants about what exactly they’ve been able to achieve since attending these learning opportunities. Shaunda says this “wild idea” emerged not only from data, but from noticing adults struggle to make social and emotional connections to their work. As the morning went on, a few themes emerged, including the crucial work of racial equity, the integration of restorative practices to build community, and the necessity of a network of out-of-school time providers to lean on for support.

In ongoing efforts to increase equity during out-of-school time, programs can leverage the benefits of social and emotional learning. Emma Kennedy, Social Worker at the Boys & Girls Club in South Boston, reflected on the intrapersonal skills she developed as a participant in the Racial Equity & You series, led by Payal Sharma. She finds it has become increasingly important for their club to ask, “How do our own experiences shape our interactions with members?” Yesenia Aguilar of Sociedad Latina says they are working “to create open spaces where young people can bring their whole selves, where they don’t have to leave part of their identity behind in order to access the program.” Many programs mentioned that they have begun to use pronouns when introducing themselves in staff meetings and with youth, as an effort to create inclusive spaces for youth of all gender identities. Self- and social-awareness are critical skills that adults must develop in order to show up for youth.

When we encounter unexpected youth behavior, even the most self-aware adults can struggle. Solomon Montagno of CitySprouts hoped staff could be more proactive and less reactive about this, and found restorative justice to be the answer. Restorative practices can provide opportunities to build deep relationships based on shared values. In an effort to incorporate restorative mindsets at the Steppingstone Foundation, Kristin Arcangeli and Mary Sullivan say they’ve had to take a hard look at how they build culture. Boston Beyond frequently recognizes Steppingstone as a very high quality program in building students’ skills. One colleague remarked that it was inspiring to hear that a program like Steppingstone would go back to the drawing board in order to ensure they are best serving their students. Though we may think of restorative justice as an approach to behavior management or discipline, Lauren Bard at Camp Harbor View reminds us that, “You need to use it for community building first, before you can use it for conflict.”

Boston After School & Beyond is proud to build community as a convener of Boston’s out-of-school time (OST) providers. Danah Blake at Camp Harbor View says, “You may not have every tool in your toolbox, but now you know someone else who has the tool you need.” Several youth workers mentioned the challenge of working with students while positioned outside of the school system. They’ve emphasized the importance of building relationships with other OST educators. They described meeting someone at a workshop, learning together, and then running into them later at a school, on the train, or when they’ve moved to another organization. All of these changemakers are part of the “after school family,” as one program director described. Others reflected that this network is one of the primary reasons they’ve participated in the SEL Circle- to find out how other programs recruit and engage with students and families.

The recent report from the Aspen Institute’s SEAD Commission, A Nation At Hope, tells us that “…too often, teachers and school leaders do not receive preparation and ongoing learning that address the science of human development and how to translate that science into their practice.” To help us conceptualize this, we brought in Lou Bergholz of Edgework Consulting, author of Vital Connections, for a fireside chat. Attendees listened attentively as Lou described his years working with youth programs to get intentional about the connections they make with their students. Lou recounted his research and practice, which he admits sometimes surprised him. In particular, he said he had not thought it was possible to “program for love,” but indeed it is. Especially through a strategy- or “Vital Connection” that he titles Make Time at the Right Time, which acknowledges the need for informal space. Unstructured time is where students most often take advantage of your guidance as a trusted adult, not during scheduled programming time. We have listened as folks expanded their boundaries of social and emotional learning this year, and witnessed a web of connections built to support the type of learning that A Nation At Hope described. Now, through these practices and more, we do see adults making these connections to their work. They have taken it upon themselves to reflect and grow as individuals, as youth workers, and as members of the OST field.